Start a Wiki
Purish is a mix of a Minecraft silverfish and a Minecraft enderman created in Febuary 2012.

Part in the save derpy floodEdit

See The Save Derpy Flood for any info.

Purish is a 6 year old silverfish/enderman hybrid who is the smart. (Almost enstein for his age) He can easily break down, he's senitive to even a banning of a character can end up scarring him. He's a weak silverfish in attacks, but is really defensive.

Cam is the "creator" that Purish talks about. Therefore, they get along well.

Des commonly helps Purish whenever he needs it (When he gets tired, Des will carry him because he is about the size of a 10 year old's hands. Really small!)

Purish loves derpy to the point he has tried to get into a Valentines dance and even win her love. Whenever he finds out Derpy is in danger, Purish instantly will step in and attack the attacker of derpy.

Purish doesn't go near lightning, as another example of fragile behavior.

Goink and Purish almost always play with each other when around. 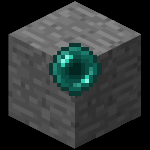 The BG Purish uses for most of his non-save derpy webpages, which is also considered his symbol.

A full picture of Purish. 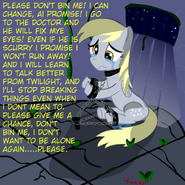 An example of Purish having a fragile behavior (Can easily break down) in one of the questions on his tumblr-powered "Ask Purish" webpage.
Add a photo to this gallery
Retrieved from "https://camwoodstock.fandom.com/wiki/Purish?oldid=4080"
Community content is available under CC-BY-SA unless otherwise noted.